Known as the Nymph of Thermaikos (Thermaic Gulf), Thessaloniki is developing as a multicultural city and West Balkan’s main hub of sea freight transport throughout its port. Having a history of over two thousand and three hundred years, earning the title of Symvasilevousa (330-1423) as a “co-reigning” city of the Eastern Roman (Byzantine) Empire alongside Constantinople, nowadays it is the second-largest city in Greece with over one million inhabitants in its metropolitan area. Despite the high level of public investments in the region during the last years, mainly in infrastructure, the level of private ones remains quite low. The backbone of the local economy consists of micro and small businesses with the vast majority falling into the category of family businesses.

Our secondment in Thessaloniki takes place at Nefeloudis Food Additives. Founded in 1965 the company now is led by the second-generation successor, specialising in the production of natural additives for the meat and dairy industry. In spite of its small size, the company has an over 50 years constant presence in the food industry, investing on improving the performance of production processes. The team of secondees from the University of Sheffield (UK) and University of Parthenope, are aiming at assisting Nefeloudis in achieving its long-term objectives and improve its environmental performance by conducting an Life-cycle Analysis (LCA) on the company’s internal and external processes with its vendors. During their first meeting last Tuesday, the team had the chance to discuss the potential of even improving the tradition LCA approach by including EMergy Accounting – a novel method which is able to convert the thermodynamic basis of all forms of energy, resources and human services into equivalents of a single form of energy (solar). Moving a step forward, the team has started to investigate the metrics associated with Social LCA as well as alternative research paths such as the development of hypothetical Circular Economy scenarios which could improve the environmental performance of the company.

Having in their quiver the tools, expertise and proposals from their first meeting, the team is looking forward to meeting next week with Nefeloudis representatives in order to discuss their operations and relationship with vendors in order to start mapping their supply chain, processes and move forward with the data collection and analysis.

In the words of the team:

“It is really exciting that such a small company is enthusiastic towards improving its processes in order to pass on to the next level that could make them bigger; allowing them to not only increase the number of employees but also invest on developing their skills and knowledge. We are confident that our plan can meet their needs and we are ready to show the flexibility required to meet our goals” 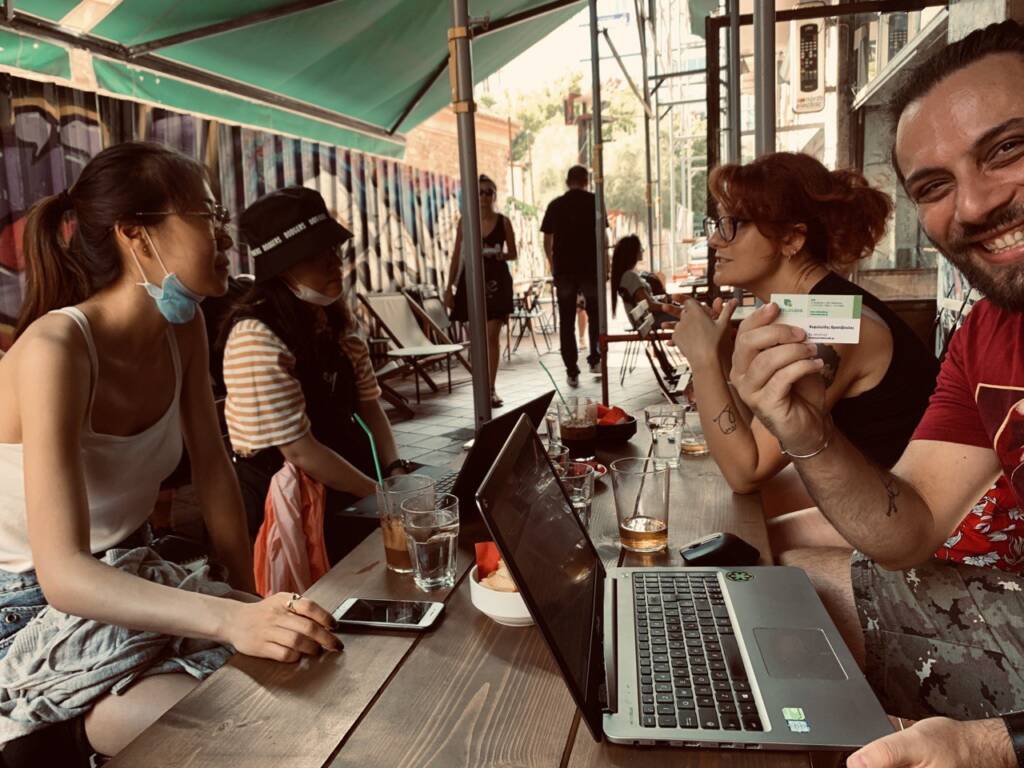 Nefeloudis secondees, Looking from the left going clockwise, Yanxin (Adriana), Yanfeng (Veronica) Serena and Remo from The University of Naples “Parthenope”. Akis (University of Sheffield) is behind the camera due to technical reasons (but he won’t escape the next photo)

An interview with the President of the Solagri Cooperative